IS THAT YOUR FINAL ANSWER? 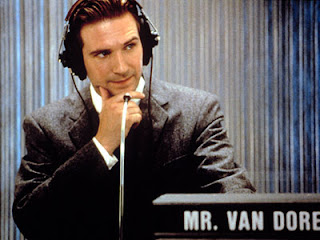 I’ve noticed something happening over the last few years – something that saddens me greatly. It’s been slow, infrequent and unsteady to begin with but the decline is gathering ever more strength – the decline of the quiz show.
I’m not talking about the game show - I’m talking about the quiz show. The straight up and down, how-much-do-you-know trivia extravaganza – never done better than the all time seven o’clock classic and one of my favourite shows – Sale of the Century. So why are we seeing the quiz show being mangled into something unrecognizable if not disappearing altogether? Are we getting stupider or is all this information that was once in our heads now in our phones? Why won’t anyone give Jeopardy another crack?
At the moment, Deal or No Deal is the most popular, successful game show in Australia – a grand-scale shell game where contestants essentially succeed or fail based on how ‘lucky’ they’re feeling at any given moment. There is no skill involved in Deal or no Deal – anyone can play. Which is not to say that’s why the show is so popular – the format would be tired by now if it didn’t have love-him-or-hate-him host Andrew O’Keefe reinvigorating the show on a regular basis with so many puns and clever turns of phrase even the contestants look confused. It’s bright lights, high concept, low skill, bells-and-whistles entertainment.
A monkey could play it. Monkeys aren’t necessarily naturally greedy creatures either, so a monkey could conceivably do quite well. While Millionaire Hot Seat intermittently challenged Deal or no Deal for supremacy in its 5:30 time slot, it has never really come close to happening. Nowadays, if you want a trivia game to succeed on television, you have to have one of three things:
1.) Celebrities. It seems we would rather watch celebrities (Spicks and Specks, Rockwiz, The Trophy Room) in our trivia games than average people we could compete against.
2.) Gambling/High stakes. Million Dollar Drop – the second in Eddie McGuire’s Fistful of Million Dollars trilogy of game shows – faded drastically after its first episode, and only got green-lighted because it had SO MUCH money and SUCH HIGH stakes and a BLOODY HUGE SET.
3.) Laughs. You can’t have a straight ahead trivia game these days – everything needs to be funny – and while that can be a good thing what I loved so much about Sale of the Century is that it found the right balance between light hearted fun and serious stakes. Look, I really miss having that show on at seven o’clock every evening. I can’t help it. I don’t like Two and a Half Men all that much.
So I have to wonder why we aren’t getting a franchise trivia game off the ground in 2011 – and as far as I can see there are two possible reasons.
1). Technology. If you frequent quiz nights you’ll notice that quizmasters have had to start banning smartphones from tables in fear that we might be googling the answers. I completely agree with this approach – god forbid the quiz night goes the way of the dodo – but it does make me wonder if the fact everything can be in our pocket makes us less likely to keep it in our heads. Personally, I use my phone to improve my general knowledge – I’m constantly reading, memorising, checking facts, playing trivia games and so on – and it would never damage my interest in a quiz show - but I’m a nerd. I can totally understand the approach that there’s no point in remembering trivial things because they’re a few clicks away. Like all technologies, it’s not the fact that it’s there, it’s how we use it that really counts. Which leads me to:
2). We’re becoming dumber. If you pay attention to most news reporting (and you probably shouldn’t – too much) you would have seen a huge outcry about the show Wipeout. According to snarky critics, this show – which featured people attempting to run an obstacle course primarily designed to hit them in the head or crotch, if not both – heralded that we had gone over the threshold of our collective national stupidity. If they’d actually watched the show, they would know it’s actually quite clever – the commentators inject a completely unreasonable amount of wit into proceedings. For me, the fact the show existed was not a concern. The fact more people I knew wanted to be on Wipeout than on Millionaire was the concern. The problem is not just that no one wants to watch Sale of the Century, it’s more that no one wants to be on Sale of the Century, much less win Sale of the Century. That, to me, is the biggest shame.
I hope it’s just a phase. I hope that there comes a time on our TV screens where we have a society that can support the return of Sale of the Century as heavily as we can support the return of It’s a Knockout.
Because I really don’t want to have to choose.
Posted by Andrew Williams at 6:26 AM