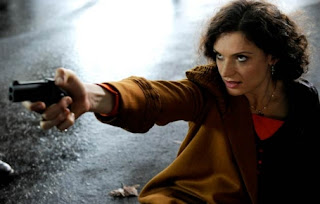 Set in Sydney in the 1920s, Underbelly: Razor follows the razor gangs of the 1920s and the battle for the underworld between vice queens Tilly Devine and Kate Leigh.
I have an ongoing problem with the Underbelly series – how can I enjoy a program where I hate all the characters?
Every Underbelly series has been almost exclusively populated with the most annoyingly stupid and selfish people known to man. We’ve been asked to sympathise with criminals, prostitutes, crooked cops and so much more. Maybe I’m too straight-laced, but you would need some of the most charming actors on the planet to make me care about what happens to anyone in these shows.
This wasn’t such a problem in the first series, which was genuinely explosive drama and had enough charming actors to see it through – while also being fantastically of the time. It was undeniably Australian television at very close to its finest.
Underbelly: A Tale of Two Cities however, was incredibly skeevy – to the point of unwatchability – and descended into completely mad plotting hell in its later episodes.
Underbelly: The Golden Mile was just solid and unspectacular – not as bad as series two but nowhere near as good as series one.
So that brings us to the fourth series of a show with stagnating, if not diminishing returns – Underbelly: Razor. Here we have what is basically the Australian sibling of Boardwalk Empire – a crime series set in the twenties and invoking all the social mores and visual signifiers of that age – flappers, pinstripe suits, hats. So many hats. More importantly, though, this was a chance for a Brand New Underbelly. A chance for the reinvention of the series. A chance to really achieve something.
So what did we get?
We got the same old Underbelly. Just with more hats.
It is certainly beautifully produced. I saw Underbelly: Razor on a cinema screen and there at least it looked stunning.  The twenties setting is pretty impressively rendered and the cast is uniformly gorgeously shot and made up.
That’s the height of Razor’s competence though as the script and plot just meander through the usual points. Judging by the first two episodes, Razor is once again saying absolutely nothing new. People are flawed, crime is glamorous and violent, prostitution is common…. etc. The only new point Razor seems to make is that it has been this way for a very long time.
This refusal to change or grow is never more aggravating than in the return of Caroline Craig as narrator. When she was narrating the first series, it was as one of the characters in the story – but from Season 2 onwards she’s just become an omniscient narrator. Not only does this not really make any sense (is the narrator still Craig’s original character? If so, has she retired from real police work and is now just reading old case files to children?), but the device has become lazy and stagnant. Rather than adding a personal layer over the story as it did in Season One, it’s now just a way for the writers to continually abuse the golden rule of television – show, don’t tell. Exposition pretty much exclusively falls to Craig and graphics because the writers don’t trust their actors, the audience or themselves to adequately tell this story without holding the viewer’s hand.
The script is also way too into its colloquialisms. I understand that the Australian lexicon is part of our national charm but that doesn’t mean we have to fit an idiom into every single sentence. After two episodes of this, can’t be far away from a ‘flat out like a lizard drinking’. Once I get hold of a DVD, I’m doing a tally. I’m sure Australians in the 1920s used plenty of this sort of slang - I just don’t think they used it exclusively.
That’s language covered, how about violence and sex? Well, this is Underbelly: Razor so there’s going to be plenty of blood and there’s going to be plenty of slicing and dicing. There’s one scene in particular that, while not shown in full, is still pretty sickeningly gory – but at least the characters all react to it as thus. The first two episodes weren’t all that violent, but I suspect it might get worse once the razors become more prevalent.
As for sex, well, Tilly Devine owns a fair few brothels so there’s going to be plenty of sex. Anna McGahan as notorious prostitute Nellie Cameron does most of the heavy lifting in this area and she brings a coquettish curiosity and sense of fun to her many, many sex scenes. Plenty of people do weird things, but none of it really leads anywhere apart from Nellie realising she likes being a prostitute.
The performances are all pretty solid. Danielle Cormack is a battleaxe as Kate Leigh – there ain’t no feminine grace here whatsoever and fair enough. Chelsie Preston Campbell plays Tilly Devine, all British accent and shrill shrieking. I suspect Anna McGahan will be the breakout star, all bitten lips and sexy eyes. – but for me Felix Williamson as Phil ‘the Jew’ Jeffs is the real charismatic presence onscreen – the show lifts many degrees when he shows up.
This is Underbelly, so Razor isn’t terrible. It’s a more than competent retelling of a crime story from the 1920s. But that’s all it is – just a very well produced re-enactment.
This is Underbelly – not with anything else inside, just a new coat of paint. The litmus test is whether I want to watch a third episode. At this stage it’s pretty fifty-fifty – but the show will have to improve its plotting and characterisation to hold my interest for more than a few episodes more – because sadly, I’ve seen this show before.

Channel Nine is yet to announce an air date for Underbelly: Razor.

Posted by Andrew Williams at 2:37 AM