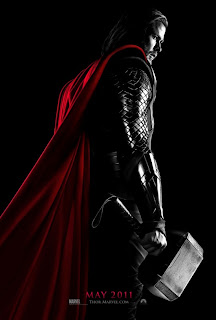 So as I went into the cinema to see Thor, I was aware that the hype had been middling in the lead-up to the film’s release. The promotional pictures had been gaudy and ridiculous, the trailer was uninspiring and the fish-out-of-water humour was in danger of derailing the whole operation. All I was hoping for, as someone who has never read a Thor comic but desperately wants this whole Marvel cross-film pollination to succeed, (I’ll never get sick of superhero films) was a three-star movie that regular punters would go and see.
I think Thor is better than a three-star movie. Thor is a very funny, sometimes thrilling epic action fantasy elevated by fantastic acting performances from all involved and surprising direction from an unexpected corner in Kenneth Branagh. It was flaws – boy does it have flaws – but for not one second of it was I bored. On that level, Thor has overcome my expectations and is much, much better than the lacklustre hype for the film would indicate.

The plot: Thor (Chris Hemsworth) has been exiled to Earth by his father Odin (Anthony Hopkins) after foolhardily destroying a precarious peace between his home realm of Asgard and the ice realm of Jotenheim. On Earth, he meets scientist Jane Foster (Natalie Portman) and her friend Darcy (Kat Dennings) after being hit by their car. As turmoil begins to envelop his home realm, he must learn humility and selflessness if he is ever to return a hero. If the Green Lantern is DC’s Star Wars, Thor is Marvel’s Lord of the Rings.

Thor is played by Chris Hemsworth, he of Home and Away and opening-scene-of-Star-Trek fame – and the steely, selfless determination he displayed in that scene is completely abandoned here. It’s abandoned to great effect, however as Hemsworth plays every beat he is asked perfectly – brash, arrogant, charming, powerful, humiliated, whatever, he nails it. I think it’s the sign of a great acting performance, especially in a movie like this, that you can’t picture anyone else in the role for a long, long time. Robert Downey Jnr IS Tony Stark, but anyone could (and will) be Daredevil. On a higher plane, Heath Ledger IS The Joker, but someone else could conceivably be Batman – despite Christian Bale being so excellent in the role, he hasn’t defined it. Chris Hemsworth IS Thor. He’s totally at home in the skin of this character (and this character’s weaponry, awesomely), as good with a romantic moment as he is with a hammer and even more surprisingly at least the second funniest character in the film. All of this, and he even looks perfect for it.

Everyone else is equally good, especially Tom Hiddleston as Thor’s ‘mischievous’ brother Loki. Both the character and the acting are executed beautifully here – Loki is the kind of villain I like – one with actual motivations, sympathetic origins and most importantly, an arc – and Hiddleston does a great job. He’s able to give away so much at times and so little at others through just the use of his eyes – he’s a powerful performer and perfectly cast. Kat Dennings as the comic relief Darcy is excellent, I loved the Warriors Three and Lady Sif (spin-off!) and Anthony Hopkins and Idris Elba are reliable as ever – though I’m fairly sure Hopkins was coasting.

My problem with this film – that I enjoyed thoroughly – is with the women. In combining the Shakespearian tendencies of Kenneth Branagh with the geek-sensibilities of comic book lore, Marvel has mashed together two drastically male-dominated areas of literature. As a result, Natalie Portman has been given absolutely nothing to do besides look pretty and giggle at Thor’s abs. She’s spectacularly smart, of course – but book-smart – and does absolutely nothing of note in the film besides get Thor to fall in love with her. No wonder, given his most immediate options are Kat Dennings (too young) and Stellan Skaarsgard (too Swedish). Couldn’t she have been given a bit of spark, a role to play in an action scene, a rapier wit, a far nerdier persona, anything? At the moment, she’s just the most gorgeous girl on the Street in the Middle of the Desert. Rene Russo as Thor’s mother is similarly inconsequential. Her part could have been played by a lamp and I wouldn’t have noticed.

The action scenes move wildly from thrilling to incompetently confusing and Branagh is still finding his feet as an action director – but there’s enough imagination in here to keep me satisfied. I particularly enjoyed whenever Mjolnir was involved. Thor uses the hammer in creative and powerful ways – he’s a genuine force to be reckoned with and you get a real sense of his power when that hammer is in his hands.

Other flaws include the cameo from a Future Avenger which feels shuttled in from Marvel studios rather than organic to the plot, often risible dialogue and the completely unnecessary 3d post-conversion, which is a complete waste of time. I’d recommend seeing it in 2D if possible, because I found the 3D glasses unnecessary, uncomfortable and annoying where I was. On the flipside, though, Branagh knows how to work with actors, and it shows. The film is long without being too long, gets the action/dialogue/laughs/exposition balance right and sets up any future movies wonderfully, without feeling like an Avengers preview.
Thor is a fun ride. Turn your brain off, sit back and enjoy the show – because this one more than lives up to the hype.

Hail of bullets:
- Zachary Levi (TV’s Chuck) was the original casting for the Robin Hood-esque Fandral (the Dashing) and I kind of wish he had been cast as he would have been perfect, but Joshua Dallas is fine. The other two members of the Warriors Three are less interesting, but fun.

- Jaimie Alexander, who plays Lady Sif, is out-of-nowhere gorgeous and charismatic. Apparently she is most famous for Kyle XY. She should be more famous.

- I would be first in line for a sequel, that’s a good sign.

- The Avengers stuff – including the cameo mentioned above and the post-credits sequence – is there purely for the geekiest of nerds. I knew about all the elements of Marvel mythology involved and what they were referring to, but the relatively geeky folk I saw the film with were clueless.

- I didn’t have my iPhone with me (preview screening), but if I had I daresay I wouldn’t have checked it once. So iphone check count: 0. Laugh count: double figures. Entertaining film.

- If Captain America is this good (don’t f*** it up, Joe Johnston), we are in very good shape for the Avengers.
Posted by Andrew Williams at 10:57 PM