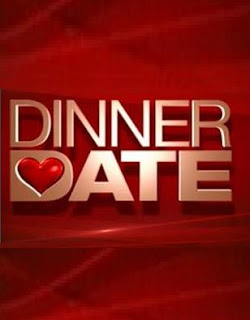 Dinner Date Australia features one single girl going on three blind dates with three men – with one twist – they’ll all be cooking for her and she’s picked them out on the basis of their menus.
Let’s get one thing out of the way.
If you’re tuning into Dinner Date Australia because you want to see Manu Feildel, forget it. Feildel spends about one minute onscreen during this and I don’t reckon he would remember any of the names of the people involved. He doesn’t get involved in the segments or offer any cooking advice, he is just the guy top-and-tail-ing the segments. This is a role where his French accent is a bigger asset than any sort of cooking expertise he may or may not have.*

*Hey, and he just won Dancing with the Stars! Isn't that lucky considering he has this new show coming up?
Now that’s out the way, what is Dinner Date Australia? The answer is pretty simple - it’s ‘Perfect Match’ meets ‘My Kitchen Rules’. The production values are MKR 101. The premise is pretty hard to screw up - just capture all the awkward tension and charm of a first date and include lots of delicious looking food. It’s not easy to go wrong - and sure enough Dinner Date Australia is a solid, vaguely amusing, slightly depressing hour of utterly disposable television.

The main problem facing all the 'suitors' is that the dinner is being cooked while the date is happening, so that’s a high degree of difficulty for anyone to overcome. They fare better when they include their date in the cooking proceedings - as does the show - because then it becomes a cooking and dating show, not just a dating show with meals shot in close-up. The casting appears to be pretty good - in the first episode, the dater (Simone) is a very winning, watchable personality* – and that helps immeasurably.**

*She's also completely stunning.
**It’s also really fun to guess why everyone’s single. In the case of our second Romeo, it’s probably the ‘Italian stallion’ shirt. We get it, you’re Italian.
It’s all very pleasant and watchable but the whole experience is a bit soured by the annoying narrator, who takes that ‘Who Dares Wins’ approach to talking directly to contestants. “Oh, Jeff, what are you doing mate?!!!”. That’s annoying. I wanted the My Kitchen Rules narrator to come back and do his trick of creating drama where there was none, rather than admonishing contestants who can't hear him.
Other cheesy moments – the slick second prospect being smooth and the producers making the genius decision to play “Smooth Operator” over it. Really thought out of the box there, everyone. Also once the actual dates are over the show descends into cheesy dates shot with soft lighting that all gets a bit 'dating service ad from 1998'.
Overall, it’s mildly diverting television that doesn’t bring anything new to the dating show table. Would I be compelled to watch another episode? Not remotely. It’s about the gentlest television you could possibly find.
Which probably means it will rate its socks off.
Dinner Date Australia airs on Channel Seven 9:30pm Tuesday.


PS: Not to spoil anything, but the ending of the first episode is kind of depressingly predictable.
Posted by Andrew Williams at 4:21 AM