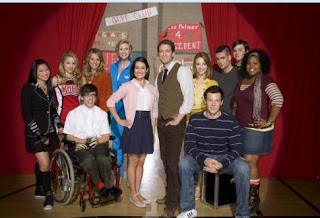 A word I use often – too often – when talking about television programs is ‘potential’. So I’ve decided to start a series of articles where I have a look at a program that might not be living up to that potential and make some suggestions that might help it get there.

GLEE
Once upon a time, there was a show called Nip/Tuck. Starring Julian McMahon and Dylan Walsh, it was the story of two plastic surgeons, their patients and their day-to-day lives. It aired on FX in the US and the first season was both controversial and critically acclaimed.
However, the crazy plot twists and outlandish actions that viewers had come to love could only sustain a show for so long, and the producers kept trying to outdo themselves until the series became a ridiculous parody of itself that only the most desperate plot-twist hound would follow.
(It’s kind of fun to re-watch if you’re doing it ironically, the same way that people watch bad movies ironically.)
Who was the creator of Nip/Tuck? Ryan Murphy.
What other immensely popular show did he create?
Glee.
The similarities between the two shows are not exactly hard to see. Emmy winning, groundbreaking and more popular than any other show Murphy has created, Glee is a massive hit. It’s also a show with much more heart and soul than Nip/Tuck and occasionally rises to incredible highs the likes of which other comedies could only dream of.
Unfortunately, it can also be unbelievably frustrating, saccharine, cynical and unwatchable. Sometimes, those highs and lows can occur in the space of an episode.
Part of that is the Nip/Tuck syndrome – Murphy and his writers rushed through so many ridiculous plots in the first season of the show (heck, the first half-season of the show) that they left themselves nowhere to turn, nowhere to develop. How can you possibly top a baby-switching fake pregnancy plot (and a horrible, horrible one at that)?
Remember the pilot? That heavily hyped 42 minutes that was so lauded they made a director’s cut? Remember how all the Glee kids seemed so sweet and you supported their dreams? How the small-town atmosphere was charming and grounded everything, even the more outlandish moments, in reality? How Will Schuester seemed like a stand-up guy in a bad marriage and his forbidden romance with the school guidance counselor was so lovable? Remember the way that the villains had simple goals with proper motives? The way you couldn’t help but get goose bumps during the final number even if you pretended you didn’t?
Where the hell did that show go? How did we go from there to the abrasive, cannon shooting, incestuous, cynical, over-budgeted and overhyped mess we have now?
More importantly, how can we go back? Here are some thoughts on what the producers and creative team need to do:
-       Identify the line of believability and recognise what crosses it and what doesn’t. Take the unbelievably talented high school band that is able to bust out whatever tune a glee club member (or anyone) dreams up. We can buy that, because it’s an accepted part of the musical format and fits in with the heightened reality. A boy in a wheelchair being allowed to play football and doing it successfully, however, is way, way over the line. The difference, I think, is that the latter is actually a key plot point and we are asked to directly accept its plausibility. The former is just a little part of the background of the show, amusing in its ridiculousness. The writers really need to pull their collective heads in, because Artie playing football was the kind of moment that stopped me enjoying the show, and watching it became a chore rather than a pleasure.
-       Realise that the adult characters are much better suited to being occasional background characters, given they’ve become such caricatures. Mr. Schuester (Matthew Morrison) in particular has become unlikeable and his character traits confused while Jane Lynch’s Sue Sylvester is so over the top she’s become grating. Find a way to utilize them properly or keep them firmly in the background. It’s not a coincidence that the best episodes of this season (Duets, Silly Love Songs) have focused squarely on the kids.
-       Work out who your best child characters are and give them more to do without overusing them. Brittany is a great background character but is starting to suffer when the show tries to put her in a vaguely serious storyline. Try not to make that mistake with Puck, Santana, Sam and co. Also, do more storylines that aren’t focused purely on relationships. The Glee Club relationship mind map must look like a two spider webs on top of each other.
-       Try and hold on to some vague integrity as far as the music goes. If you go back to some of the musical highlights (Don’t Stop Believing, Dream On, either sectionals performance, Defying Gravity and many more) of the series so far, almost none of them are current pop hits. The cramming of Katy Perry’s body of work and other chart-toppers might make a truckload of money, but it doesn’t serve the show at all creatively. I know almost every musical theatre type I’ve spoken to hates the show with a passion, but I do think it gets exponentially better when they draw from musical theatre for their performances.
-       Most of all, don’t be afraid to go small. What has always worked about this show is the way all these kids feel so suffocated by their surroundings and want to break out through music. That’s why ‘sectionals’ and ‘regionals’ episodes always worked so well – because it was a cathartic moment for the characters where you felt the thrill of performance almost as much as they did. But when you stage massive dance scenes and huge production numbers every second week, their dreams of performance don’t carry the same impact when they are finally realized.
There’s plenty more, but this article would go on for pages – and those are the things I believe are the most pressing. If you’ve got an idea on how Glee could get better – or you think it’s brilliant and they shouldn’t change a thing, feel free to comment!
Posted by Andrew Williams at 11:47 PM