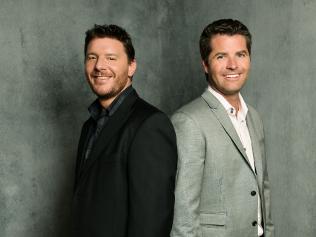 My Kitchen Rules made its debut early last year in a post-Masterchef haze as Channel Seven’s great white cooking show hope. It kicked off to good ratings and has since become one of my guilty pleasure shows – and Channel Seven are counting on improved ratings in its second season. Subtle as a sledgehammer, the editors desperately eke every ounce of drama out of an undercooked mushroom or a lumpy mousse. It’s great fun, but only if you don’t take it too seriously.
What makes My Kitchen Rules so much fun to watch is the dinner party conceit that opens up the series – it’s so entertaining to see the teams either unsubtly try to undermine each other or blissfully abandon all pretence of competition whatsoever and just enjoy being on TV.
The key to any reality TV show is the casting and this time around the agents have done a good job. This year the show features two sets of six teams after deigning to include pairs from Tasmania – and the first set have plenty of entertaining elements. In a series like this there is always a ‘villain’ team and we’re spoilt with two – the upstart bitchy housemates (SA last year, Vic this year) and the show’s most entertaining couple in sometime, the henpecker and henpeckee from Tasmania.
The other teams in the first set are also entertaining; the two butchers trying to set the world record for use of the word ‘mate’, the charming young sisters with Polish heritage, the ebullient used car salesman and his quiet wife and the delightful Italian cousins from Western Australia. (Don’t let the annoying, gimmicky, oh-my-goodness ads during the tennis put you off, they’re actually really lovely.) They’re mostly versions of teams we saw last year, but no less fun to watch.
The judges (Manu Fieldel and Pete Evans) are more confident this time around, carrying a swagger they didn’t have in the first season. They still indulge in annoying reality-show fakeouts like ‘I didn’t like it…(interminable pause)…I loved it” but they’re charming and good looking enough to keep the show watchable.
I’ll be putting up brief thoughts on each individual show as they come along – because as I said, this show is more in my wheelhouse than Masterchef is. Masterchef is all about inspiration and the life story behind the food we make. My Kitchen Rules doesn’t worry too much about that – cutting straight to the competition and being all the better for it. They’re both perfectly worthy reality shows but My Kitchen Rules has captured that same element that made it so ridiculously watchable last year – and that’s a good thing in my book.
Posted by Andrew Williams at 6:15 PM