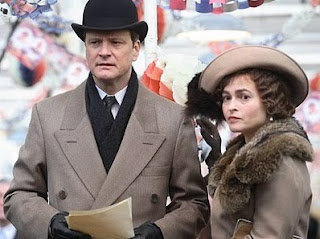 About half an hour into the King's Speech, Lionel Logue, the Australian speech therapist played by Geoffrey Rush, auditions for Richard the Third. He's asked where he received his theatrical grounding. "Perth" he replies. "Big theatre town?" asks the director, sarcastically. "...Enthusiastic" replies Logue.


In the cinema where I was watching the film - Innaloo, in Perth's outer suburbs - there was an unusually loud laugh. (And the King's Speech is a very funny film). Make no mistake, it was a laugh of self deprecation - laughing at ourselves and our perceived lack of achievements, in a way that was so very Perth. So very Australian, for that matter. Doesn't matter if you've given up trying to achieve something - as long as you can laugh about it, that's fine. It's the Australian way.

Lionel Logue is not that kind of Australian. In his inimitable style, he is a man that is ALWAYS trying to achieve something, always looking to the next goal, even in the face of failure. He is a man that does not accept where the world wants to place him. He is a man that aspires to be SOMETHING, and for Australian audiences, he is a character to be much admired - and Geoffrey Rush catches every single moment of that passion to succeed and that pride in the face of failure.

The King's Speech - the story of the Duke Of York overcoming his speech impediment on the way to becoming King of England during World War II - is a very very good film. Not necessarily a brilliant film - though it has one outstanding element - the acting.

I had heard all the talk about Colin Firth as Best Actor, but before I saw this film I couldn't imagine anyone being better than Jesse Eisenberg is in "The Social Network". Having seen the King's Speech, Firth is at least just as good and although I'm still torn on who should win Best Actor come the Oscars, I know who will. Colin Firth.

The old football adage is that you need to lose a Grand Final to win one. Unless, of course, you're St. Kilda. Nominated last year for A Single Man, Colin Firth will be desperately unlucky to miss out this year. He is:
- now a prestige actor, not just Mr Darcy.
- in a critically praised film with an outstanding cast and commercial appeal.
- older, British, and due.
- brilliant - and brilliant in a part that requires him to play a disability, which he does with realism, understanding and a complete lack of self-awareness.
- loved by the public.

As much as I adored Jesse Eisenberg's performance in the Social Network, Colin Firth just has too much going for him to miss out - and best of all, he'll be completely deserving. He is fearless, real, charming and compelling.

He's matched every step of the way by Geoffrey Rush. Rush's best asset - and the one that makes him one of the best actors in the world - is that in every film, no matter how many times you've watched him act - somehow he manages to make you forget he's Geoffrey Rush. Maybe it's his complete lack of movie star good looks - you never quite forget you're watching Tom Cruise, for example - but he's simply brilliant. Impeccable timing, an always expressive face, even when it isn't, and a complete embrace of the character makes this a remarkable performance. Christian Bale will want to be REALLY good in "The fighter".

Helena Bonham Carter is incredibly charming as George's wife Elizabeth - and everyone else is as great as you would expect from a film of this nature and pedigree. I especially liked Timothy Spall as Winston Churchill, who manages with just a few lines to be really likable and entertaining while staying just under the radar of caricature.

As for the movie itself - well as you've heard, it's excellent. Tom Hooper's direction is striking, the script is funny and charming, and it absolutely should be a best picture nominee. Why shouldn't it win? Because while it might be entertaining - and excellent in every aspect, it doesn't have the impact and the thought-provoking nature of "The Social Network". The King's speech is a great story - it entertains and informs - but past the way it involves you in the lives of the characters and the way their individual foibles came to effect historical events - it never quite gives us much to think about. The Social Network makes us think about the role of technology, the impact of greed and the nature of friendship. The King's Speech never quite achieves that level of thematic complexity, though it does have its moments.

(Many will tout the titular speech as Firth's finest moment - but for mine, the most compelling scene happens roughly half way through, after the death of his father - where his character finally opens up about his childhood. Both actors, but particularly Firth, are remarkable. It is the film's most meaningful and complex moment.)