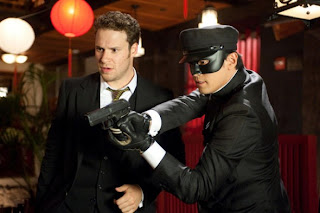 It’s hard not to watch The Green Hornet without thinking about Batman. Under the stewardship of Seth Rogen, The Green Hornet plays like Batman if Batman didn’t have skills, an alternative personality or sense of purpose.
That’s not the world’s worst idea. There’s the possibility of a subversive superhero movie there – like a more professional Kick-Ass – and if one director and star combination might pull it off, it’s Michel Gondry and Seth Rogen.
Unfortunately, they don’t.
I’m a big fan of the superhero film, as I’ve made clear already, so I thought the Green Hornet could be something interesting and different. But the film makes Britt Reid such an uncomplicated, unlikeable jackass that you lose any interest in his story whatsoever. That’s the primary problem with The Green Hornet – The Green Hornet.
In my preview piece on this film I guessed that either all the different elements and sensibilities in this film – comedy star Seth Rogen, kung-fu exponent Jay Chou, indie director Michel Gondry and charming, respected Oscar winner Christoph Waltz – would gel to create something special or butt into each other to create a mess. Unfortunately, the answer was behind door number two.
The Green Hornet starts off shakily with what might be the world’s most uninspiring superhero seed-planting scene in history. Spoilt fat kid gets his toy broken by his frustrated father – again, its like the anti-Batman. But instead of making me feel for the kid and understand why he was such an a**-hole, it just made me think maybe he’s always been an a**-hole.
Seth Rogen has a lot of fun with his role but unfortunately Britt Reid is so badly written that he can only do so much. It’s a testament to his screen presence that there are flickers of likability and charm, but he does so many stupid, arrogant things that you just lose interest in watching him. Well done to Rogen for achieving a remarkable feat of screen charm but the odds are too insurmountable for him here.
Similarly Jay Chou certainly has some charm and a watchable presence but the chemistry between himself and Seth Rogen really doesn’t have the spark the film is looking for – and depends on to be a success. Their characters meet during the film and learn about each other in the process of becoming superheroes but that concept sacrifices the two having any sort of long-standing bond. I think that would have overcome the language problem the pair face and helped out both the buddy comedy and our enjoyment in watching it.
When I was watching the trailers I wondered what Cameron Diaz was doing in this film, as she never seemed to be anything more than eye candy. But you kind of get it when watching the film – her character is smart and capable and so on. Nevertheless, although she’s said she took the film to work with Michel Gondry but the role still seems…beneath her somehow. Christoph Waltz does a decent enough job with a horribly underwritten villain* but suffers the same fate as everybody else.
*Can we have a moratorium on the movie trope of the villain that shoots people for the smallest reason and doesn’t appear to care? It’s lazy, lazy screenwriting.
Moreover, it’s hard to tell exactly why these characters are so underwritten. There are only really three action scenes but the story tries to introduce too many characters, none of whom have any chemistry with each other. There’s a scene early in the film that features a cameo from Rogen-associated actor that is by far the best scene in the film – displaying the charisma, wit and energy that the rest of the film is sorely looking.
Looking back on what I’ve written so far I’m noticing it’s almost all negative. There are good points to The Green Hornet if you’re not expecting too much. All the actors are engaging presences by themselves, Gondry involves in the occasional directorial flourish and there are a few funny scenes. Mostly, however, The Green Hornet makes the classic, oft-repeated action movie mistake. If we don’t care about the characters, we don’t care about the action involving them.
I don’t care about the characters in The Green Hornet and I want better from my blockbusters. It’s an occasionally entertaining but ultimately shallow and forgettable film. 7/20
OVERALL RANKINGS FOR THE YEAR
The King’s Speech   17/20
The Fighter               15/20
Black Swan               12/20
The Green Hornet    7/20
Posted by Andrew Williams at 8:10 PM