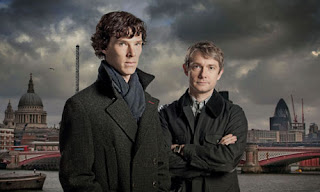 Before we begin – it should be pointed out that for a show to qualify it had to appear on Australian free-to-air television in 2010 – so that rules out Mad Men, Breaking Bad (despite a half-assed appearance on the ABC), Dexter etc.)

Name the best five American TV shows of all time. Mad Men, The Wire, NYPD Blue, Friends, Seinfeld, The Simpsons, MASH, etc. etc. etc. Too easy – there’s almost too many to choose from.

Name the best five English TV shows of all time. Fawlty Towers, Life on Mars, The Office, Doctor Who, Spooks, Prime Suspect, etc. – it’s not quite as easy it is with the Americans, but still a plethora of great TV to make up your list.

Now name the top five Australian TV shows of all time. Um, Masterchef? Underbelly? Kath and Kim? I’m struggling. And if you take comedies out of the equation, we are in deep, deep trouble.

So it is with much pleasure that I’m able to put an Australian drama on this list.

Quite simply, Rake was the best Australian drama of the year. While it occasionally came off as our attempt to make House, but with an Australian lawyer rather than an American doctor, it gets credit from me for actually trying to achieve SOMETHING. In an Australian television landscape dominated by the (admittedly outstanding) reality show Masterchef, and the incredibly popular saccharine soap-drama Packed to the Rafters, Rake stood out as the only thing we produced that could match it with the brilliant TV coming out of the States. The acting was second to none – with Rachel Griffiths specifically her usual brilliant self – and Richard Roxburgh put in a solid performance. My main qualm about the show is simply that none of the characters are very likeable. It makes it very difficult to get truly invested in the show as opposed to than just sitting back and respecting it from a distance – you have to want to spend an hour with someone in the ensemble. It’s for that reason – it’s a show I respect, rather than I show I love - it sits at the bottom of a high-quality list.

A great comedy does three things. It makes you laugh. It makes you feel. It makes you want to watch it again. Two and a Half Men does one of those things. The Big Bang theory does two. Modern Family does all three. That’s why it’s one of the best shows on television. It’s got the best comedy cast in the business (there’s not one weak link here) and rewards second and even third viewings with a surprising level of depth. I was slow to really enjoy Modern Family – like Rake, I respected it but didn’t love it – but the last half of the first season and the start of the second season have been fantastic. The entire cast is brilliant but I have to give special recognition to Rico Rodriguez as Manny – a brilliantly original and beautifully acted character – and Nolan Gould as Luke. Watch a couple of old episodes of Modern Family and pay more attention to Luke. The comic acting is genius. (Gould is a member of Mensa –makes sense.) So why is Modern Family not higher on the list? Because it makes some tonal missteps – I’m still not sure that Cam and Mitchell have totally found their niche – and the end of episode voiceovers can come of as very sitcommy. It’s well produced, well acted, well written, well directed and often brilliant – and only a slight lack of originality and emotional heft prevents it from a higher position on this list.

Which episode should I watch?
‘Manny Get Your Gun’ – Any episode based around Rico Rodriguez’s Manny is fine by me. The way the four stories arrive at a conclusion is Modern Family at its best.

I’ve been worried about something for a really long time. There are basically two kinds of dramas on television – the procedural and the serial. The last plot-heavy serial to really succeed on network television was Lost – and even that lost steam dramatically (ratings-wise) halfway through its run. Cable channels still do decent serials – but networks (NBC, CBS, Fox, ABC in the states, Seven, Nine, Ten, ABC here) have started abandoning the serial drama because viewers have been doing the same thing. So we were on track to lose the art of the serial in this world of DVDs, online viewing, pirating and so on where it’s becoming increasingly difficult to bring viewers back to follow an ongoing story week after week. The Good Wife is remarkable because it does just that.

Combining the procedural sensibilities of the legal drama with the ongoing storylines of a political thriller, the Good Wife is the most intelligent, adult drama of 2010. Those dismissing it as a girlie lawyer show from the title could not be doing this remarkable program more of a disservice. Somehow, The Good Wife manages to cram legal cases with ethical quandaries, a love triangle, a political campaign, a family drama (though Alicia’s kids are often annoying), a mystery, office politics and god knows what else into the same amount of time that your average CSI franchise takes to work out who killed the prom queen. It does all this with wit, charm, glamour and a great cast – the highlights of which are Josh Charles as Will – the romantic if ethically malleable shark – and Alan Cumming as Eli – the do-anything-to-win political strategist. It’s gold. You should watch it.

What episode should I watch?
Take your pick from the late episodes of the first season, or anything from the second. I’ll pick Hybristophilia from Season One, where all the storylines begin to culminate at once and Dylan Baker’s creepy-as Colin Sweeney character reappears.

Not as consistent as Modern Family, not as laugh-out-loud funny as the Big Bang Theory, not as much heart as Parks and Recreation or the Office – so why is the little-seen, much-loved Community at number two on my list? Because, out of every comedy on television, when Community on form it’s the best thing on TV. The Dan Harmon sitcom about a group of misfits at a community college made a stumbling start – trying to establish its world without getting a lot of laughs. It even took me a bit of time to come back to the show after watching the first two episodes and deciding there wasn’t anything there for me. But eventually, I came back for episode three (the Dead Poets society episode) and loved it. But it wasn’t until one line during episode four that I knew that this was a show that I would fall in love with.

Abed: “I didn’t realise that we were really good friends. I figured we were more like Chandler and Phoebe. They never really had any stories together. Sure, I’ll do it Chandler”

Hooked. A great line – especially if you know Friends, as I do back to front – and a meta-commentary on the show that also works as a perfectly calibrated character moment. The show was often outstanding from that point on – despite the occasional off episode – and it reached its peak with one of the best episodes of comedy in living memory – Modern Warfare. If you haven’t seen this daring, inventive, hilarious pastiche of modern action movies – see it. The show has never reached those heights since – sometimes forgetting that for episodes like that to work, we need to be invested in the emotional stakes of the character as well as understand the references – and that troubled the show during the beginning of its second season. But around episode five, Community found its groove again and returned to being the most creative, intelligent, deep (both comedically and dramatically) and daring show on television. Sure, it has its troughs, but for the highest peaks on television, it gets my spot at number 2.

Which episode should I watch?
You should watch Debate 109, where Abed predicts the actions of his classmates with short films, Modern Warfare of course, and Cooperative Calligraphy (the bottle episode) from Season 2.

Sometimes when you compose a list like this the number one choice is cut and dry. My top movie for the year, for example, was a lay-down misere. But any of the top four on this particular list really could have been number one (remembering of course, that for a show to qualify it has to be on free-to-air Australian television) and it was tougher than usual to place a show at the top of the list. In the end, it was one scene that tipped the brilliant British mystery Sherlock into first place.

Unfortunately, I can’t say anything about it. The scene is such a great twist (after twist, after twist) that I wouldn’t want to take the risk of spoiling it for anyone who hasn’t seen it. Suffice it to say that the final scene of the three-episode series is worth the four-hours plus that precedes it alone. Tense, exciting, scary and funny – it’s a ripper.

This is not to say that anything that comes before is exactly tough going. Sure, the second episode’s mystery leaves something to be desired – although the visuals and characterisation around it are just as good – but the first and third episode are the most entertaining ride you’ll be taken on all year. Benedict Cumberbatch is a fantastic Sherlock, infuriating, enigmatic and impressive in equal measure – while Martin Freeman proves how having a capable, likeable and intelligent Watson lifts the dynamic of the mystery to another level.

The mysteries are ludicrous but entertaining, the visuals are fantastic and the modernisation of the character is seamlessly integrated – always feels like an asset and never a gimmick. It’s the most fun you’ll have watching TV all year.

Which episodes should I watch?
All three episodes (though you can miss the second if you’re lazy) are well worth your time. Just make sure you stick with it through to the end. Episode three, The Great Game, is my second favourite episode of TV all year.