WHY YOU SHOULD WATCH: PARKS AND RECREATION 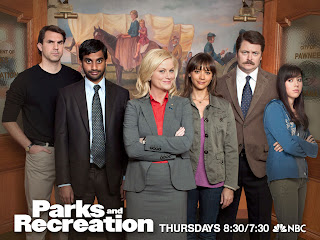 Ever had this conversation?
“I mean, it’s like that episode of Mad Men where Don Draper…”
“Oh, sorry, I haven’t seen Mad Men”.
“You haven’t seen Mad Men? What’s wrong with you, it’s the BEST SHOW EVER!”
Is there any more annoying discussion to have with someone? As if you’re cultural education isn’t complete because you haven’t seen some obscure TV show most people only watch so they can be included in conversations?
So these pieces, in which I beseech you to watch TV shows you may not have come across, are not intended in that manner. They are simply explanations of why television shows are worth watching if you’ve never got past the title, or the pilot.
Maybe it should be called ‘why you could watch:’.


Back in 2004, some producers at NBC got together for one of those most ill-fated of projects – the American remake of a British show. Their target was Ricky Gervais’ hit mockumentary sitcom The Office. After a shaky first season that gained creative momentum towards the end of the six episodes (mainly because the creative team stopped trying to replicate the British version) – The Office became a critical and commercial hit.
Fast forward to 2009 and as The Office enters a creative lull, a little show called Parks and Recreation pops up on the same network. With key creative team members Greg Daniels and Michael Schur behind it after leaving The Office, it starred Amy Poehler and its mockumentary format and deluded, zany main character had a lot of people dismissing it as an Office clone.
They naysayers were actually more right than even they knew. After a shaky first six-episode season that gathered momentum towards its conclusion, the second season became a critical (although sadly not a commercial) hit. By getting a better handle on its main character (like The Office) and fleshing out its supporting cast to allow each member to shine (like the Office) it became one of the best comedies on television.
If you haven’t seen the second season of Parks and Recreation, I can’t recommend it highly enough. The show gets better and better as it goes along until hitting a creative high in its final stretch.
So what makes it so good?
First and foremost, the writing – television has always been a writer’s medium and Daniels and Schur are clearly two of the most talented guys in the business. Although Parks and Recreation might be the most boring title in the history of the medium, what you’ll find upon digging into the series is that the series effectively mines the humour in the mundane matters of government as brilliantly as The Office mined humour from the politics and petty matters of the workplace.
If you didn’t like The Office, then why might you like Parks and Recreation instead? Because Parks and Recreation is a much happier, brighter show – even if some of its subject matter is quite dark – and the characters and cast are much more exuberant, eccentric people. Amy Poehler’s Leslie Knope started out as Michael Scott-lite but has become hilarious – not because of her incompetence but because of her ridiculous levels of competence.
You have talented stand up comedian Aziz Anzari as a hilariously stereotype-defying underling, Aubrey Plaza as the most delightfully sarcastic intern ever, and many other delights. Special mention has to go to Nick Offerman as Ron Swanson, one of the most originally, hilariously masculine characters on television – right down to his moustache.
I could write down a hundred great jokes and situations that occur during the second season but I’d rather you discover them for yourself. Remember how much fun it is when you discover a new sitcom and you smash through an entire series in a couple of days?
Parks and Recreation is totally one of those shows. And if even if you don’t take that advice – maybe you could just enjoy this video….

http://www.youtube.com/watch?v=9LXuAtRwuGY
Posted by Andrew Williams at 5:41 AM