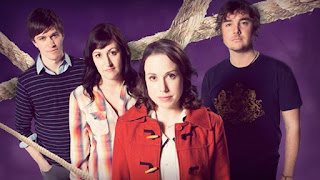 TV REVIEW – LAID
Now that’s more like it.
After a series of Australian television launches and new programming that never quite hit the mark, along comes a series that is well worth your time in Laid.
Written by Marieke Hardy (former television critic now columnist and blogger), Laid tells the story of Roo McVeigh, who is shocked when she finds out an ex-boyfriend has passed away while overseas. After a death of a second ex-lover, Roo starts to wonder if there’s some sort of a pattern.

I won’t give away any more than that except to say that this is most-definitely an original, high-concept series with enough of a basis in everyday life that it will hopefully find an audience. Thank heavens for scripted Australian television that I can completely get behind.
Laid gets a lot right – but nothing more so than the casting of Alison Bell as Roo. This is a really, really great comic performance – not outlandish or over-the-top – just a finely calibrated master class in the comedy of awkwardness and social ineptitude with more than a dash of wit and timing. She’s brilliant and I’m really pleased this role was written for her.
Even though it’s about sex and death, Laid is most certainly a comedy – and not one of those comedies where you cringe more than you laugh. I laughed out loud seven or eight times during Laid and was more than entertained throughout. It’s not hilarious, but it will elicit plenty of chuckles – and that’s thanks to the whip-smart writing by Marieke Hardy. The dialogue cracks along, makes a couple of good observations and never descends into the cringe-worthy ocker speak that afflicts so many of our other homegrown programming. It’s quirky, sure, but it never feels like it’s striving to be quirky. It just is.
Celia Pacquola plays EJ, Roo’s best friend and is amusing enough without any discernable character traits to work with. I liked Abe Forsythe as the IT guy Roo has a flirtation with and all the supporting cast were excellent, never overplaying their hand.
Like any high-concept show Laid is going to have trouble sticking the landing, (especially if a second series is an option) but that doesn’t matter as much as the ride we get along the way. Through the charms of its lead actress and character, Laid is a ride I’m very much looking forward to being aboard.
Laid airs at 9:30 on ABC1 on Wednesday nights, and I highly recommend you catch up on iView if you haven’t seen it already and check out some quality Australian programming.
Posted by Andrew Williams at 8:31 AM